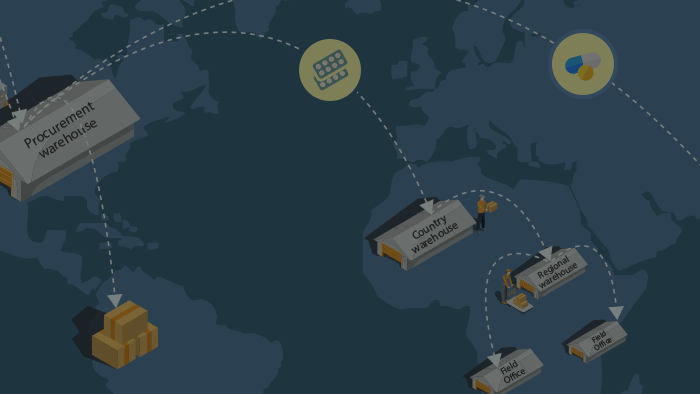 Effective supply chain management is the biggest challenge in every industry. However, there is additional risk and complexity in healthcare as a compromised supply chain can affect the patient’s safety. Increased adoption of technology and globalization in an industry with multiple stakeholders has given rise to a complicated health supply chain.

Experts have estimated the sale of counterfeit drugs is twice the legal pharmaceutical trade rate, which is a severe issue.

With its transparent, immutable and auditable nature, the pharma blockchain holds the potential to enhance the supply chain’s

Blockchain-focused companies are working on remodeling tracking and accountability in the shipping of goods.

Blockchain in Pharma Supply Chain can manage inventory as well as reduce counterfeiting and theft issues. In the global health domain, organizations like Red Cross, USAID, or the Global Fund aim to trace back the distribution of donated medications across different countries.

We shall explain how blockchain can be implemented in the pharma supply chain and its benefits to the ecosystem.

To help people understand the potential of blockchain in the pharma supply chain, we have discussed the following topics:

The U.S. drug distribution model mainly comprises three trading partners – manufacturers, wholesalers and pharmacists. Let’s consider the case of the pharmaceutical supply chain and how pharma blockchain works in it.

Stakeholders that can be involved in the distribution of drugs are as follows:

Step 1: Manufacturer manufactures the drugs and adds QR code to it

A manufacturer produces the drugs and adds the QR code to it,

The information added by the manufacturer gets stored on the blockchain, providing transparency to the supply chain to other stakeholders.

Once information is added to the blockchain, a hash ID is produced that can be used for tracking the transactions.

The drugs can be shipped to the distributors via IoT-enabled vehicles with temperature sensors to enable cold-chain shipping.

It can also be possible to exchange and store the data gathered by temperature sensors on the blockchain. In the case of an audit of temperature-sensitive drugs’ storage conditions, the transparent and immutable distributed ledger can save a considerable amount of time.

The drugs transferred through IoT-enabled vehicles can also send the real-time location to the blockchain, allowing the stakeholders and government agencies to track drugs’ delivery conveniently.

With the help of Hash ID stored on the blockchain, distributors can verify the origin of medicines after collecting them from the logistics service providers.

They can trace back the information added by manufacturers such as the date and place of manufacturing, and if it passed quality checks.

Distributors validate the received medicines and sign the transaction digitally, which is then added to the blockchain.

The signed transactions trigger the smart contracts to send drugs to the hospitals/pharmacists.

Step 3: Pharmacists receive the drugs and verify its source

Pharmacists get the drugs which can be traced back to know its origin, using the hash ID saved on the blockchain.

Suppose any illegal distributor tries to sell counterfeit drugs with fake drug ID to pharmacists or patients. In that case, the transaction is considered invalid because of the false information added about the drug.

Therefore, pharmacists would immediately know if any anomalies are found within the transactions.

Once the pharmacist approves the received medicines, the transaction between them and the distributor is added to the blockchain, ensuring the legal deal.

Step 4: Patients buy the drugs and scan the QR code to trace back its source

Patients can ensure if the medicine they are buying is safe or not. By scanning the QR code attached to the drug’s packaging via their mobile app, they can know its source and quality standards.

The hash ID linked to the QR code would fetch information from the blockchain for patients’ access.

Patients can give ratings or feedback for the drugs they buy, linked to the drug’s ID stored on the blockchain.

The rating added by the patient can help other individuals to decide if the specific drug is effective or not.

What are the benefits of blockchain’s implementation in the health industry?

A private blockchain can be the compelling use case of the pharmaceutical supply chain, but the rights granted to each stakeholder can be different depending on their roles.

Merck is the world’s oldest operating pharmaceutical company. It has developed the SAP Pharma Blockchain POC app in partnership with SAP.

A manufacturer registers on the SAP Pharma Blockchain POC App after dispatching a bundle of pharmaceuticals. It generates:

The distributor can obtain this information from the package’s barcode.

Counterfeit barcodes are avoided due to the tracking feature. Also, the app allows the stakeholders to ensure that the deliveries are taking place without any oddities.

Novartis is currently in the process of launching an IoT and blockchain-based solution for tracking temperature and identifying counterfeit medicines. The project leaders are Marco Cuomo and Daniel Fritz. It plans to launch it by the end of 2020.

Novartis is also the lead industry in forming a 29-member blockchain consortium for the European Union and the European pharmaceutical industry. Earlier known as the Innovative Medicine Initiative (IMI), it is now known as Pharmaledger. It was formed in January 2020.

Developed by LeewayHertz Technologies, TraceRx is a distributed ledger platform that enables traceability of shipment of drugs and solves thefts, recalls and transparency in the medicine shipments.

Our team of blockchain development experts provided a blockchain solution that helped our client empower the entire drug supply chain with enhanced tracking and traceability.

If you are also looking to transform your pharmaceutical supply chain with blockchain, consult us and discuss your requirements with us.

Talk to us to discuss your Supply Chain Blockchain Project