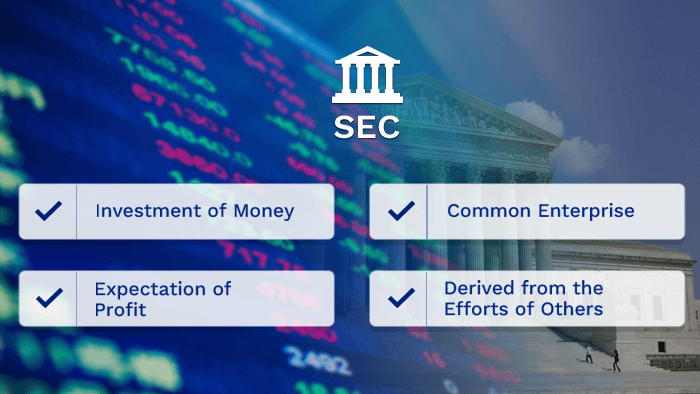 ​The rise of cryptocurrency era has brought both technological transformation and regulatory/legal conundrum. Startups have started making innovative use of cryptocurrency as Initial Coin Offering to create and offer new crypto tokens in exchange for fiat currency.

With its decentralized and deregulatory nature, cryptocurrency posed legal puzzles for multiple law authorities, for example, US securities law. So, the fundamental question is whether a cryptocurrency should be subject to US Securities Law.

Various schemes have been designed for raising funds to avoid securities laws applications.

The courts have analyzed these schemes to examine whether they are investment contracts under the federal definition.

Howey Test was devised to determine if the securities are subjected to specific disclosure and registration requirements.

In this article, we shall discuss the Howey Test, how it applies to cryptocurrencies, and what could be its future impacts on the crypto market.

What is the Howey Test?

One of the leading cases on the investment contract definition in the US Supreme Court, SEC v. W.J. Howey Co. under Howey Test states that an investment contract is a transaction, scheme or contract where a people invest their funds in a common enterprise and expect profits solely from the efforts of a third party or promoter.

Also, the U.S., SEC has declared that cryptocurrencies, which pass the Howey Test are securities and are subject to securities regulation as well.

Supreme Court has created the “Howey Test” to identify whether certain transactions qualify as “investment contracts.”

Let’s have a clear understanding of the term “Security” before discussing the Howey Test in more depth.

The Securities Act of 1933 and the Securities Exchange Act of 1934 were established a century ago to dictate a significant part of the U.S government’s way to deal with financial regulation.

Under Section 2(a)(1) of the Securities Act of 1933, transactions that qualify as “investment contracts” are referred to as securities like promissory notes, books, bonds and stocks.

Investment transactions have a fundamental impact on how the world of finance observes and collaborates with securities.

Therefore, it is crucial to have a consistent way of determining whether the transaction qualifies as investment contracts.

All the offered securities must be registered with the Securities and Exchange Commission (SEC) in the US.

An organization, which provides securities that are not exempt, should register them.

The registration process involves the disclosure of specific information, which includes:

The origin of the Howey Test

The supreme court heard a case, SEC v. Howey in 1946. It was concerned with the fact of whether a leaseback agreement was a legitimate investment contract or not.

Buyers were offered with the options to lease any bought land back to the defendants so that they could use the area, harvest, pool and sell the citrus.

Though many buyers did not belong to the farming and did not have agricultural expertise, they were satisfied to lease the land back to the defendants.

But defendants were sued by the SEC for these transactions, as they broke the law by not filing a securities registration statement.

While making a decision, the supreme court declared that the defendants’ leaseback agreement is a type of agreement.

As a result, the Supreme court developed a landmark test to determine whether transactions are investment contracts, which are subjected to securities registration requirements.

According to the Howey Test, a transaction is only an investment contract if:

Howey test’s concerns whether the investment’s profit is largely or completely outside the control of investor. If yes, the investment can be considered as security. But, if the investor has a critical influence on how the investment is managed, then it is not a security.

While deciding Howey, the Supreme Court built a test, which considers investment’s substance instead of its form to determine if it is a security.

Investments, which are not labeled as a “Bond” or “Stock” can be a security under the law if registration and disclosure requirements are applied.

After Howey Test creation, some promoters masqueraded securities to escape registration requirements. Therefore, the courts have started to view the economic realities associated with an investment scheme to eradicate such crimes.

Here are four elements that represent the Howey Test

Under the Howey Test, an investment of funds includes a provision of capital, cash, assets, goods, services and a promissory note.

Since the buyers of token or coin pay for them with cryptocurrency, there would be an investment of funds in exchange for the token/coin undoubtedly. Hence, the first rule of the Howey Test is satisfied.

Different judicial courts use various tests to analyze if a common enterprise exists in the US.

Following are the three predominate approaches:

It is not wise to assume an investment contract as security even if it gives a return or profit.

Work efforts of others

Expected profits are gained by using cryptocurrency and not just by holding it.

All four requirements should be met for a token or coin to considered as security.

How is the Howey Test Applied to Crypto Market?

For many decades, the Howey test is an important determiner of regulatory oversight. So, let’s try to find out whether the Howey Test can be applied to tokens which serve as securities.

The tokens are classified into two types: security token and utility tokens.

Security Tokens: Security tokens are built to offer ownership rights in the firm. The profit is to be expected from the investment of money based on the labor of others. As a result, the project becomes successful and the value of the tokens gets increased.

The security tokens offer many benefits such as lower issuance fees, enhanced market efficiency and fractionalization of a larger asset.

Utility tokens: In a network, utility tokens represent a unit of account. The utility would be added in the token as much as the network grows.

The demand for the tokens increases as the network size grows along with the transactions volumes.

Are you still wondering if utility tokens are an investment?

Yes, because there is an investment of money that fulfills the first Howey criteria. Though these tokens may not represent shares in a firm, it doesn’t mean the token will not grow in value.

Token’s value increases based on the project’s ability to attract users and enhance the token over time. It is expected, that profit may be increased for token holders, satisfying the second Howey criteria. Also, the investment’s profit is based on the other’s efforts.

Therefore, all the three criteria of the Howey Test are fulfilled and can make utility tokens securities as well.

The Howey Test is crucial, particularly in those areas where the organizers of the project intend to raise funds from investors who belong to the USA, or the project itself is planned to be implemented in the USA.

As it was developed by the US Supreme Court in the SEC v. Howey case, the test enables building a link between a financial transaction and an investment contract as security type.

As per the opinion of the US Supreme Court, the investment contract is one of the unstable mechanisms, in which the investor allocates fund in a way to ensure profit or income from the operation.