Solana: First Blockchain to use Proof-of-History 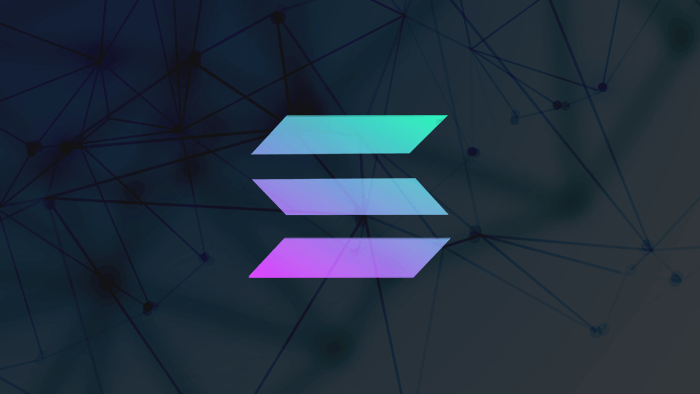 Therefore, Transaction Speed (TS) is one of the major factors in blockchain development as it also drives network traffic. The increased transaction speed of blockchain results in better data transferring amongst the various parties for confirming the transactions. One such high-speed blockchain is Solana. Solana blockchain has an attribute of cryptographic time-sampling that can regulate the network traffic and can accommodate up to 65,000 TPS. Solana is thus the fastest blockchain that performs transactions in a blink.

Let’s now understand Solana and its fundamentals to get in-depth knowledge about its working. This article will guide us through the concept, components and features of the Solana blockchain.

Solana is defined as a public blockchain system that is decentralized in nature and operates in an open-source manner. It achieves its consensus with the help of proof of history and proof of stake. Solana can regulate transactions of peer-to-peer with its cryptocurrency called SOL and assures 50,000 TPS. Solana blockchain is “censorship-resistant” as guaranteed by its founders, and it also supports smart contracts and Non-Fungible Tokens.

Back in 2017, Solana was founded by Anatoly Yakovenko. Yakovenko wrote a whitepaper on the concept of timekeeping technique concerning the distributed systems known as Proof of History (PoH). Proof of History helps in eliminating the issue of scalability and time needed to reach the consensus on transaction orders. Yankovenko believed that this innovative technique could easily automate the blockchain process of transaction ordering, giving a key piece that will drive the crypto networks to scale beyond their capacity.

In the second quarter of 2018, Solana Labs began seeking funding to develop its new crypto network. The team raised more than $20 million in private token sales between April 2018 and July 2019. In late July 2019, they announced the sales as a single Series A. The fundraising campaign coincided with Solana’s progress on the protocol, which went through various permissioned testnet phases until the company announced the Tour de SOL public incentive testnet in Q3 2020. The initial stage of Tour de SOL went online in February 2020, and it is still active today with the Solana Mainnet Beta version.

Solana became live on Mainnet Beta in March 2020 after raising $1.76 million in a CoinList public token sale. Basic transaction capabilities and smart contract functionality were available on the project’s beta network. However, because Solana was still deciding its continuing issue schedule, it did not contain any staking rewards. The current goal is for the beta version to be upgraded to a more production-ready version in late 2020 or early 2021. Solana intends to upgrade its Mainnet Beta network to a complete mainnet version later in December 2020 or early in 2021. Solana’s suggested inflation schedule will be introduced in this expanded version of mainnet. On December 7, 2020, the voting time to enable “pico-inflation” on the Mainnet Beta will begin, followed by the voting period to permit full inflation on December 21, 2020.

Solana Labs is still a major contributor to the Solana network, and the Solana Foundation assists in funding continuing development and community-building initiatives.

Sols is the native token of Solana (SOL). Lamport’s are fractional sols named after Turing Award recipient Leslie Lamport. 0.0000000000582 sol is the same as a Lamport value.

Within the network, SOLs are used in two ways.

Token Distribution and Launch of SOL

Five separate financing rounds, four of which were private sales, were used by the Solana team to distribute tokens. These private sales started in the first quarter of 2019 and concluded in a $20 million Series A lead by Muliticoin Capital, which was disclosed in July 2019. Distributed Global, BlockTower Capital, Foundation Capital, Block change VC, Slow Ventures, NEO Global Capital, Passport Capital, and Rockaway Ventures were among the other partners. In exchange for their investments, the companies got SOL tokens. However, the exact amount of tokens distributed to investors was not disclosed. Solana stated that the extra funds would be allocated to engineering and project management.

In 2020, Solana raised an additional $4 million with its fourth private sale (called a Strategic Sale) and a public auction sale sponsored by CoinList. The balance SOL tokens will be distributed to Solana Labs employees, the Solana Foundation (to aid development and counterbalance validator voting power), and a “community reserve” (also maintained by the Solana Foundation) to finance community projects and app developers.

The following is the first distribution of SOL tokens:

What are the wallets supported by Solana?

Solana’s native command-line programme, as well as third-party wallets, support a variety of wallet types. Solana advocates utilizing one of the app wallets or a browser-based online wallet for the majority of users since they will give a more comfortable experience for users than using command-line tools. Command-line wallets may be more suited for expert users or developers, as new features on the Solana blockchain will always be supported first on the command line before being incorporated into third-party solutions.

Below mentioned are the type of wallets supported by the Solana blockchain:

What is the consensus mechanism of Solana?

Build on Solana with LeewayHertz.

To decrease communication cost and latency, Solana’s Proof of Stake (PoS) based consensus method, termed Tower BFT, uses the network’s Proof of History (PoH) approach as a reminder before consensus.

Voting on a fork is limited to a defined period of hashes called a slot each time a validator votes on it. For one slot, the current network configuration is about 400 milliseconds (ms). The network has a possible rollback point every 400ms, but each successive vote increases the length of time it must delay before it may unroll that vote. In summary, secondary votes make it considerably more difficult to reverse transactions in a certain slot.

As a result, a block with many votes has a better probability of surviving in the chain indefinitely. Each validator, for example, has voted 32 times in the previous 12 seconds. The vote that took place 12 seconds ago now has a timeout of 232 slots or around 54 years. In effect, the network will never reverse its decision. The most recent vote, on the other hand, has a latency of two slots, or roughly 800ms. Depending upon the number of slots old votes is committed to doubles every slot as new blocks are added to the ledger, existing blocks are more likely to be confirmed. After two-thirds of system validators have voted on the order of events, Tower BTF delivers finality. When a transaction is completed, it is sent to the next step in the process and cannot be reverted back on-chain.

The Solana mainnet will use delegated Proof-of-Stake (dPoS), which allows token holders to contribute to the block creation process and receive rewards by either staking their tokens and becoming validators themselves or delegating their tokens to trusted validators.

Anyone on the network can become a validator and participate in the protocol’s overall security. Although the leader selection mechanism (which validator gets to propose the next block) is stake-weighted, there is no minimum staking requirement. The network structure is built to grow with bandwidth and hardware, and GPU cores are used to parallelize processing and shorten verification times.

What technology stack does Solana use?

The five fundamental breakthroughs that make up Solana’s extremely performant blockchain are:

Solana is an open-source platform elevating the scope of scalable transactions at a fast pace. Keeping a record of major transactions is a challenging factor. For instance, Bitcoin records its transactions by clubbing them into blocks with the help of a timestamp, utilizing a lot of time, as its single node needs to validate the block in consensus. But with Solana, this is not the case. Proof-of-History consensus in Solana improves the efficiency of blockchain by integrating timestamps while recording each transaction. Hence, the historical records of every transaction permit the system to monitor the transactions. In this manner, the consensus mechanism serves as a clock for the network. Therefore, Solana regulates its transaction monitoring tasks at a faster speed with enhanced security and privacy.

We have skilled developers and hold strong expertise in blockchain development. We develop efficient blockchain applications with our in-depth experience, engaging and assisting our clients with quality services. If you desire to hire an expert blockchain development company to create Solana decentralized applications, you are at the right place. Beginning from consultancy services to laying out your development map, we will guide you in achieving your desired project. 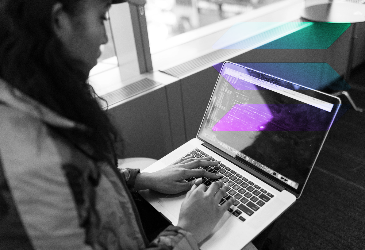 How to build a dApp on Solana?

Solana is one of the fastest blockchains for a smooth dApp development with features like minimum gas fee and cross-chain dApp hosting. 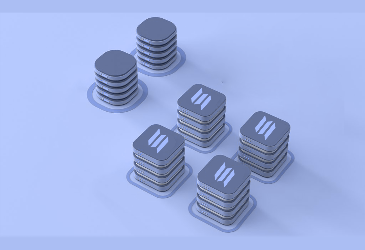 How to develop an NFT marketplace on Solana?

Solana features the revolutionary PoH consensus model that speeds up transactions. The network is designed to host decentralized and scalable applications like NFT marketplaces. 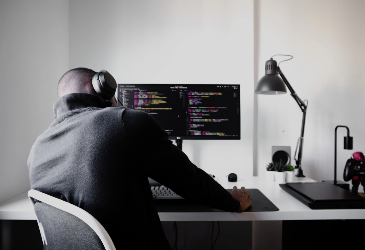 How to Build & Deploy Smart Contracts on Solana?

Cross-chain swaps enable the exchange of tokens across different blockchain ecosystems without any central authority or intermediaries. 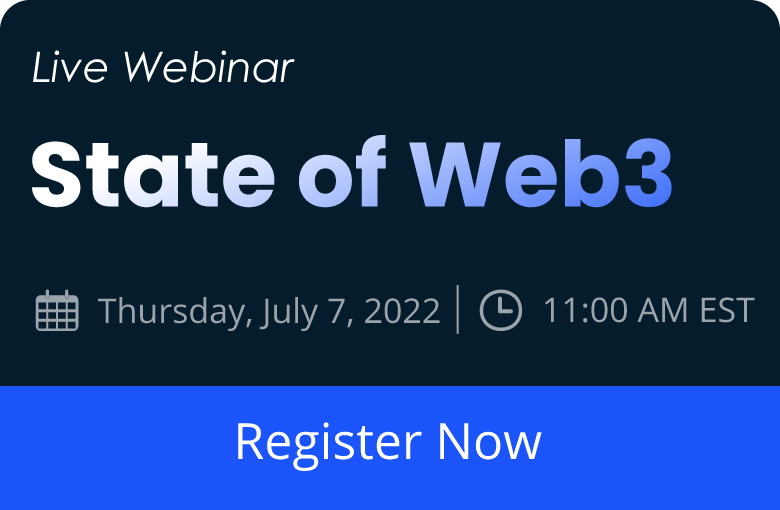