HOW TO CREATE, TEST, AND DEPLOY SMART CONTRACTS ON XDC NETWORK? 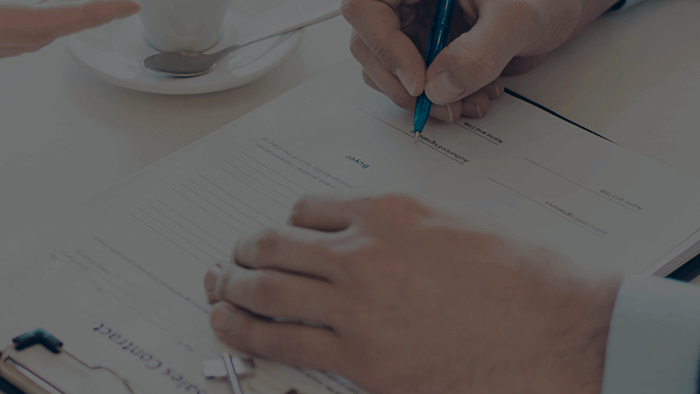 While the most basic implementation of blockchain technology is to timestamp digital records on a secure and distributed network, enterprises worldwide continue to launch innovative blockchain use cases and introduce the world to the power of blockchain.

Likewise, the need for a private blockchain emerged after people realized the limitations associated with Bitcoin, and now enterprises are interested in using hybrid blockchain networks. However, the selection of blockchain depends on the project type and the purpose it intends to serve.

XDC Network is a prominent hybrid blockchain with smart contract functionality, powering various blockchain-based solutions and thus getting traction across diverse industries. With more blockchain projects seeking to benefit from the hybrid blockchain’s infrastructure, various projects are being developed on the XDC Network.

What is XDC Network?

As a major upgrade by the XDC community, the XDC blockchain officially has been designed to empower global trade and finance. The network has been unveiling considerable upgrades and new products since then. The XDC Network leverages the power of XDC delegated proof of stake (XDPoS) consensus, and it offers EVM compatibility, allowing developers to build robust dApps and blockchain-powered solutions.

XDC Network adopts a “stakeholder approval” approach to ensure high-end security and resolve issues with the consensus mechanism. The platform enables tokenization, digitization, and quick settlement of trade transactions. Reducing reliance on Forex exchange (FX) infrastructures and increasing efficiency for greater flexibility in liquidity management across financial institutions. For an in-depth analysis of the XDC Network, check out this insight.

How do smart contracts work on the XDC Network?

Smart contract on any blockchain automates the executions based on certain predetermined rules besides acting as the backend for the decentralized applications. With XDC smart contract, you can do the following:

The XDPoS network allows you to create a tradable token used as a currency. Tokens minted with the XDC platform use a standard coin API compatible with any XDC blockchain wallet.

Developers can build secure and fault-tolerant dApps on the XDC platform that bring transparency and remove intermediaries from the ecosystem.

You can also use XDC smart contracts for fundraising. For example, you can create a smart contract and set a deadline. If you fail to achieve the goal,

Why should you choose XDC Network?

XDPoS is a unique consensus algorithm that intends to make the XDC Network more efficient for solving scalability issues and other blockchain-based problems without consuming high energy like other mainstream blockchains.

XDC blockchain, through its XDPoS, consumes low computation resources of 0.0000074 TWh. In comparison, Ethereum and Bitcoin are 20.61 and 71.12, respectively. The platform’s robust smart contracts ensure a fast transaction confirmation time of two seconds, and it offers a 2000+ TPS. Such capability of this network is considerably higher than Bitcoin and Ethereum.

Even the most prominent blockchains refuse to allow consumer-grade hardware to run a masternode. In contrast, XDC Network can easily run a 108-Masternode system to support ingenious techniques like double validation, staking using smart contracts, and true randomization. XDPoS also offers a self-KYC feature that every public masternode holder must use to perform their identity verification to participate in consensus.

By interoperable smart contracts, XDC Network refers to computer programs encoded on the blockchain accessible across multiple blockchain networks. For instance, there’s no need to build separate smart contracts to regulate dApps on Ethereum and the XDC blockchain since a single contract can regulate both.

How does the XDC blockchain execute smart contracts?

Before discussing smart contract creation, let’s first understand the execution environment of the XDC Network and how it runs smart contracts.

XDC Network is an Ethereum Virtual Machine (EVM) compatible blockchain platform. EVM is a runtime environment for smart contracts written on the XDC network. As the name suggests, it is not physical; but a virtual machine. The functionality of EVM is limited compared to that of the virtual machine; for example, it cannot generate random numbers or make delayed calls on the internet.

Hence, coding smart contract programs in assembly language do not make any sense, and the XDC Network needed a programming language for EVM, which is Solidity. Now, let’s have a walkthrough of the creation and deployment of Smart Contracts on the XDC Network using Solidity.

How to create and deploy smart contracts on the XDC Network?

XDCPay acts as both a wallet and XDC browser. With XDCPay, you can interact with dApps and smart contracts without installing any software or blockchain. You need to add XDCPay Chrome Extension to your browser, create a wallet and submit XDC. Before writing smart contracts, you must have some amount of XDC tokens in your XDCPay wallet.

Step1: Create a wallet with XDCPay 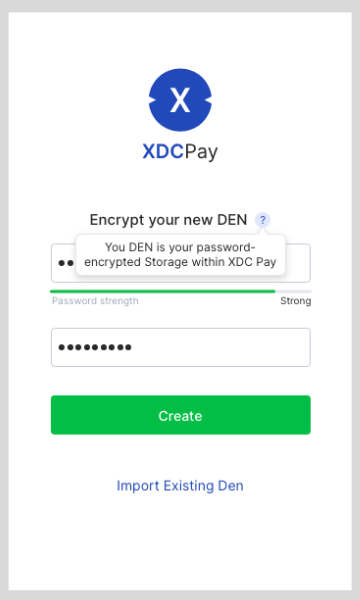 After creating and confirming your password, you’ll be given a secret backup phrase. That phrase is required to backup or restores your XDCPay account even when you forget the login credentials since it is derived from a unique hash associated with your account. 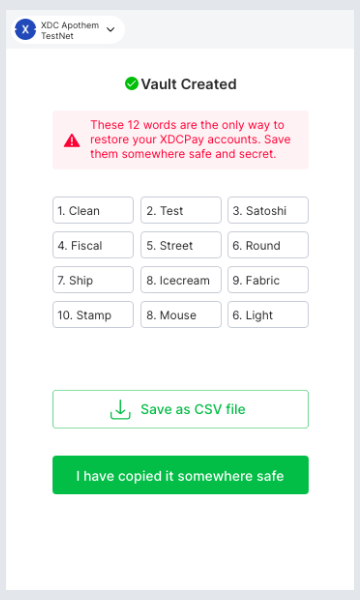 Keep this phrase safe either on an external encrypted hard drive or on a piece of paper. The next step is to ensure that you are in the XDC Network’s Mainnet.

You need to select the “XDC Apothem Testnet” to test the smart contract before deploying it on the mainnet. Note that this Apothem network is solely for testing purposes and the XDC provided to this network is a dummy with no real value. 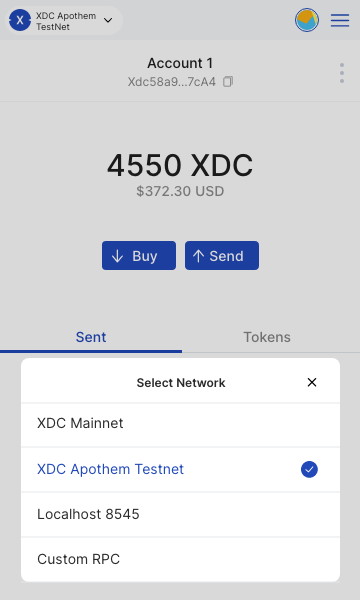 To test the smart contract, you need to have some dummy XDC in your XDCPay wallet. For example, if you need to test a contract using a test network, select that network, and you will see 0 XDC as the initial balance in your account.
To add the dummy XDC, visit the faucet and enter your XDC address. It will provide you with 1000 XDC for testing smart contracts.

After receiving 1000 XDC, you will view pop up like this: 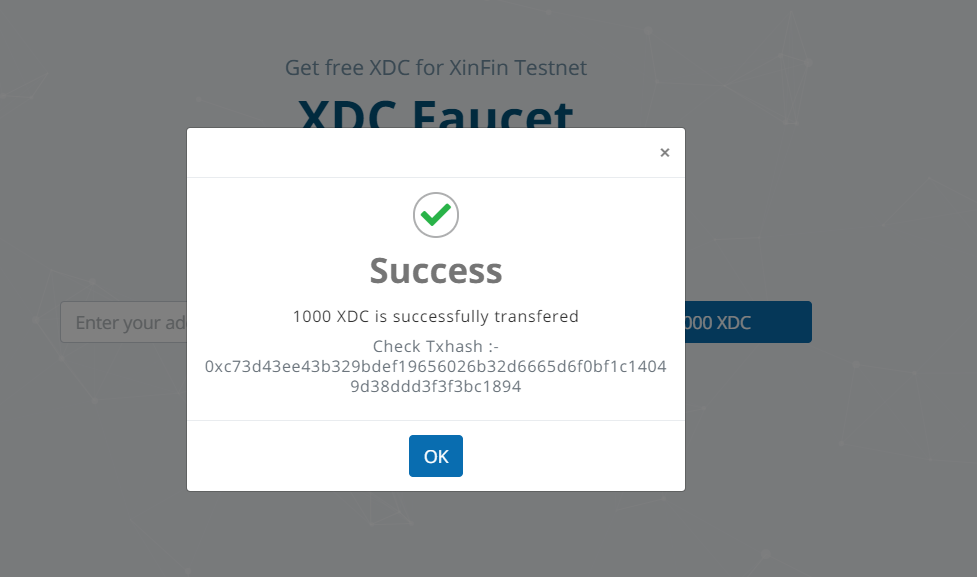 Once you have dummy XDC in the XDCPay wallet, you can start creating smart contracts and coding on the Remix Browser IDE in Solidity programming language.

Open XDC Remix Browser and click on the plus icon on the top left side to create a .sol extension file.

XRC20.sol is a standard template for creating XRC20 tokens

Deploy smart contract at XDC Apothem Test Network by clicking the “deploy” button on the left side of the Remix IDE Window.

Wait until the transaction is processed. After committing the transaction, the address of smart contracts can be seen on the left side of the Remix Window.

Firstly, the user’s wallet will store all the XRC tokens.

Go to the XDCPay window to check tokens in the wallet. Click “add tokens”, enter the smart contract’s address, and click Ok. You would see the number of tokens here.

Now, let’s discuss the steps for testing smart contracts on the XDC Network.

If you are looking for smart contracts development services, we can help you. We have a team of experienced blockchain developers who can create and deploy smart contracts on various blockchain platforms, including XDC Network, Tezos, Ethereum, etc.