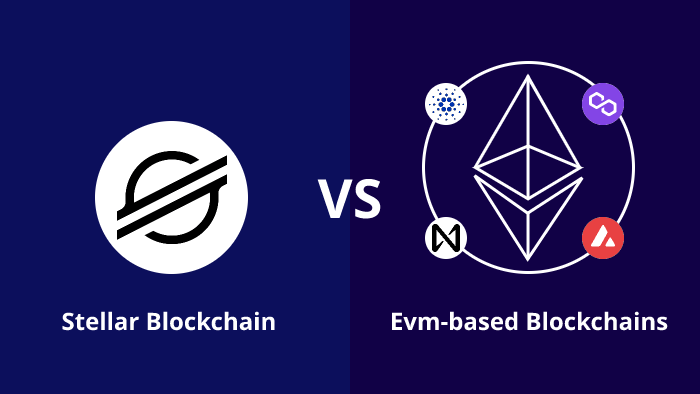 One of the key advantages of EVM-based blockchains is their versatility. Unlike some other blockchain technologies, EVM-based systems are designed to support a wide range of different types of applications and use cases. This means EVM-based chains can be used for everything from financial transactions and supply chain management to voting systems and identity verification. This flexibility makes EVM-based blockchains a good choice for businesses and organizations that need a customizable and scalable solution.

On the other hand, the Stellar network is designed to be scalable, secure, and low-cost, making it an attractive option for financial institutions and other organizations that need to process a high volume of transactions quickly and cheaply.

Since its launch, the Stellar network has gained traction in the financial industry, with several major banks and payment providers adopting it for cross-border payments and other use cases. It has also been used for various other applications, such as supply chain management, identity verification, and asset tokenization. As a result, the Stellar blockchain has emerged as a leading player in the distributed ledger technology space and is likely to continue to grow in popularity in the coming years.

This article will give you a comprehensive evaluation and comparison of both Stellar and EVM-based blockchains.

What is an EVM-based blockchain?

An EVM-based blockchain is a type of blockchain that uses the Ethereum Virtual Machine (EVM) as its runtime environment. The EVM is a decentralized platform that runs smart contracts, which are applications that run as programmed without the possibility of downtime, censorship, fraud, or third-party interference. EVM is a popular choice for building decentralized applications, also known as dapps.

The EVM was first introduced as part of the Ethereum blockchain, developed in 2014 by Vitalik Buterin and other blockchain experts. Ethereum was designed to be a decentralized platform that enables users to create and run smart contracts on a global network of computers. This allows developers to build decentralized applications that are transparent, secure, and tamper-proof.

One of the key features of the EVM is its ability to execute smart contracts in a deterministic manner. This means that the EVM will always produce the same results for a given input, which is essential for ensuring the integrity and security of the smart contracts that run on it. The EVM also uses a stack-based architecture, making writing and executing complex smart contracts easy.

Another important feature of the EVM is its support for multiple programming languages. This allows developers to write smart contracts in various languages, such as Solidity, Serpent, and LLL, making it easier for them to build decentralized applications accessible to a wider audience.

The EVM is also designed to be Turing-complete, meaning it can run any computation represented as an algorithm. This allows the EVM to execute various applications, from simple smart contracts to complex decentralized applications.

One of the main benefits of using an EVM-based blockchain is that it provides a decentralized and secure platform for running smart contracts. Because the EVM is decentralized, it is not controlled by any single entity, so it is not subject to the same risks as centralized systems. Additionally, the EVM uses advanced cryptographic techniques to ensure the security and integrity of the smart contracts that run on it.

Another benefit of using an EVM-based blockchain is that it allows developers to build transparent and tamper-proof applications. Because the EVM is a decentralized platform, all transactions and interactions on the platform are visible to everyone on the network. This makes it difficult for anyone to manipulate or censor the data on the blockchain, ensuring that the applications that run on it are transparent and trustworthy.

Additionally, the EVM allows developers to build scalable and efficient applications. Because the EVM is a decentralized platform, it can process transactions and execute smart contracts faster than traditional centralized systems. This makes it a good choice for building applications that require high transaction speeds and low latency.

What is a Stellar blockchain?

Stellar is a decentralized, open-source blockchain platform founded in 2014 by Jed McCaleb and Joyce Kim. The platform is designed to enable the seamless and efficient transfer of money between individuals and institutions, and it uses distributed ledger technology to facilitate fast and secure transactions.

One of the key features of the Stellar blockchain is its use of the Stellar Consensus Protocol (SCP), a consensus algorithm that enables the network to reach consensus without the need for a central authority. This allows the Stellar network to operate decentralized, which is essential for ensuring the security and integrity of the transactions on the platform.

In addition to its support for multiple currencies, the Stellar blockchain enables users to issue digital assets. This allows organizations to create and issue digital tokens, which can be used for various purposes, such as representing a share in a company or a physical asset.

The Stellar blockchain is also designed to be scalable and efficient. The network can process thousands of transactions per second and has low fees, making it a good choice for applications requiring high transaction speeds and low costs.

One of the main benefits of the Stellar blockchain is its focus on enabling financial inclusion. The platform is designed to make it easy for individuals and institutions to access financial services, regardless of location or financial status. This is achieved through the Stellar network, which enables users to transfer money quickly and securely without intermediaries or complex financial infrastructure.

Another benefit of the Stellar blockchain is its emphasis on security. The platform uses advanced cryptographic techniques to ensure the security and integrity of the transactions that occur on the network. This makes it difficult for anyone to tamper with or censor the data on the blockchain, ensuring that the transactions that occur on the platform are transparent and trustworthy.

Leverage the benefits of a one-stop managed blockchain solution.

Use DLTStack for a one-click blockchain launch.

What are the major points of difference?

Another key difference between the two platforms is their support for different programming languages. The Stellar blockchain uses a custom programming language called StellarCore, designed specifically for the platform. In contrast, EVM-based blockchain platforms, such as Ethereum, support multiple programming languages, including Solidity, Serpent, and LLL. This allows developers to write smart contracts in a language they are familiar with, making it easier for them to build decentralized applications on these platforms.

One of the main benefits of the Stellar blockchain is its focus on enabling financial inclusion. The platform is designed to make it easy for individuals and institutions to access financial services, regardless of location or financial status. In contrast, EVM-based blockchain platforms, such as Ethereum, are not specifically focused on financial applications and may need to provide a different level of support for financial inclusion.

Another benefit of the Stellar blockchain is its emphasis on security. The platform uses advanced cryptographic techniques to ensure the security and integrity of the transactions that occur on the network. This makes it difficult for anyone to tamper with or censor the data on the blockchain, ensuring that the transactions that occur on the platform are transparent and trustworthy. In contrast, EVM-based blockchain platforms may provide a different level of security, as they may be subject to different vulnerabilities.

A comparison between Stellar and EVM-based blockchains

Overall, the Stellar and EVM-based blockchains are decentralized, open-source platforms designed to enable the creation and execution of smart contracts and other decentralized applications. While both platforms have many similarities, there are also some key differences between Stellar blockchain and EVM-based blockchain, including the type of consensus algorithm they use, their support for different programming languages, and their capabilities regarding the types of applications that can be built on them.

If you are looking to launch Stellar or EVM-based blockchain for your testing or production environment, Use DLTStack, a one-stop managed blockchain solution for the instant development and deployment of blockchain. DLTStack provides access to robust tools and features, including a blockchain explorer, faucet, and governance. 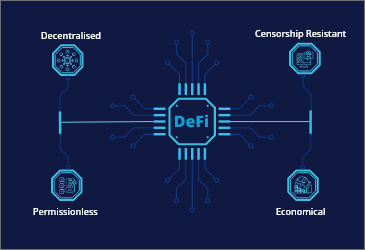 DeFi asset tokenization is the next step in the evolution of securitization, made possible by blockchain technology.

END_OF_DOCUMENT_TOKEN_TO_BE_REPLACED 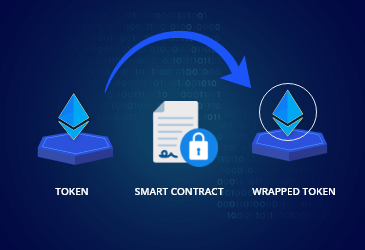 Learn how wrapped tokens play a critical role in enabling cross-chain interoperability and in providing new financial services within the blockchain ecosystem.

END_OF_DOCUMENT_TOKEN_TO_BE_REPLACED 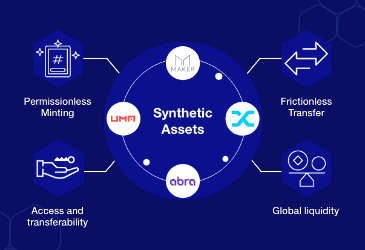 What are synthetic assets in decentralized finance

Crypto synthetic assets are gaining popularity in the crypto world as they allow investors to benefit from token fluctuations without actually owning them.